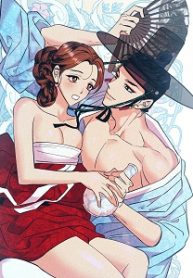 At the sweet age of 20, Gyuyoung became a widow on her wedding day. Being forced by her in-laws to die alongside her husband, she decided to run away with all her remaining fortune and bought a tavern. Unfortunately, her situation didn’t get any better and all that came to her tavern were houseflies. One day when she was worn out from worrying about what her future holds, a man appeared in front of her saying that he is the long-term resident of that place.